Allow me a proud moment to announce four jointly-written novels with Edith Parzefall and published by
Double Dragon Publishing. Our wonderful characters develop throughout the series. 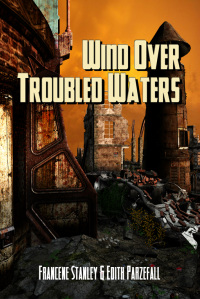 Edith Parzefall and I have worked long and hard in an internet collaboration to create our post-apocalyptic fantasy series of four books ... so far.

Corn World. Britland. After the great flood, only memories, debris and derelict buildings speak of a past civilization. Visions of these disturbing times haunt Cerridwen's dreams. When her dying mother sends Cerridwen to find a mural in Saint Eyes and lead Britland into a better future, the young healer has little choice but to set out on a life-changing quest. Her ability to perceive auras convinces her to accept nature-attuned Trevly's offer of protection.

Bent on adventure and enthralled by the promise of treasure, beautiful Sasha, cunning Aron and uncut Boris join forces to get the most out of life. Their selfish plans collide with Cerridwen's when they learn about a powerful ring and a mural pointing the way to its location.

You might like to see the five star reviews on Amazon  Available as Kindle and paperback version.
See Double Dragon Publishing. 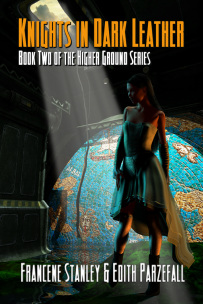 The second novel in our Higher Ground series: Knights In Dark Leather

From inside the flap: After a great flood destroyed civilization, a band of adventurers hunting for treasure challenges Cerridwen's quest to lead Britland into a better future. She and her friends race against their rivals to Saint Eyes, where they hope to find a mural that leads the way to a powerful moonstone ring influencing the world.

Far in the future after the great flood.

Waves rolled in from the ocean and retreated with a hiss. Lulled by the rhythm, Cerridwen strolled along the dry sand with Trevly. She longed to stroke him again but held back. His aura pulsed with more violet than blue, his usual colour of the caretaker. Cerridwen had never met anyone else who could see the haze of colour around people, but she treasured her gift. 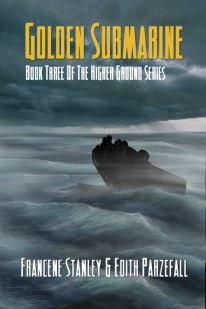 The third novel in our Higher Ground series, Golden Submarine.

From inside the flap: After the great flood destroyed civilization, Cerridwen gains the unlikely support of a band of adventurers on her quest to lead Britland into a better future. As they row along the coast of Corn World to reach Long Doom and find a powerful ring, they face dangerous, mysterious, and bizarre adventures. Lured by the Gold Lord’s treasure, Sasha endangers their lives and Britland’s fate.

Chapter One
When Cerridwen agreed to join the expedition, she didn’t reckon on pulling herself to Long Doom by her arms. She heaved her unwieldy oar through the water. The salt tang in the air stung her nose and sent a pain through the front of her head. She hadn’t expected to be rowing a solid wooden craft with her six companions to search for ancient treasure in a flooded city. She could only hope everyone would respect her claim on the ring her mother had seen in a vision, and would settle for the rest of the jewellery. Of course, that was assuming they found the articles mentioned on the stone tablet in the cave at Saint Eyes. She sighed. Better to take one step after another. First, they had to get to Long Doom. 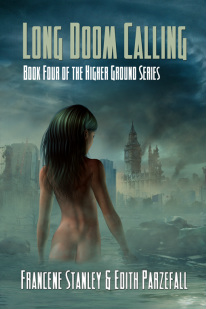 The fourth novel in our Higher Ground series: Long Doom Calling
From inside the flap:
Cerridwen and her band of adventurers reach the derelict city of Long Doom, where horrors roam dark alleys and ramshackle buildings. A street-wise girl guides them to the dark waters of down under. Cerridwen dives to lift powerful Egyptian jewellery meant to help her prevent war raging through Britland. The Grey Wolves, ruling gang in Long Doom, close in on the country bumpkins from Corn World while Lord Oxenford's army marches towards the city.

Chapter One
Cerridwen leaned away from Trevly's back to check his aura.  Indigo flared above his head, marking him a man driven by a mission.  Her mission.  When their horse jumped a rock in their path, she grasped Trevly's wiry stomach again and gripped him tight.  Her heart swelled with love.

In the early dawn light, the dry forest rustled in the strong wind, promising more adventures.  Their five friends rode ahead.  Aron and Sasha shared a horse.  Hugo and Brunhild sat doubled up astride another mount stolen from Lord Oxenford's stables.  At the rear, Boris, the strongest, gentlest man in Corn World, rode alone on a sturdy animal that could bear his weight. 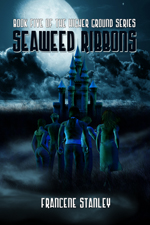 And now: The final novel, Seaweed Ribbons, which I wrote alone, is a spin-off for those wishing to find out what happened to Raymond when he's left behind.


After the Great Flood, an outcast couple try to evade capture.

After the great flood destroyed civilization, a newly-wed couple must prove their love, despite every opposition. Working in her vegetable garden, Ginny's singing tames a wild dog, which she names Sentry. During their daily swim, Ginny gathers seaweed ribbons to commemorate their meeting and arranges to use them as a signal if they ever separate. Insecure by nature, Raymond tries to settle in his young bride's underground home at Saint Eyes, but when her matriarchal society opposes his plans, he and Ginny set out for his original town. Eric, her long-time admirer follows, hoping to divide the couple and win Ginny for himself. But there is no easy route through wild land populated by different cultures in Corn World, Britland.

Seaweed Ribbons. You'll find it on An Amazon site near you as well as Double Dragon Publishing, where you can see all five novels on the same page.